(CNN)Jurors on Friday began their deliberations in R. Kelly's federal trial in Brooklyn, where he faces racketeering and sex trafficking charges.

The jury deliberated about four hours in the afternoon before the case was adjourned until Monday. Before leaving for the day, they sent a note saying, "We the jurors have not reached a verdict."

Earlier, the jury had asked for evidence related to witness "Sonja," requested a floor plan of the Chicago recording studio Kelly used in the early 2000s, and a letter that witness Jane allegedly wrote to her brother at the direction of Kelly.

Kelly's attorney Deveraux Cannick said they were not concerned about the evidence the jury requested, saying that "they just asked for evidence."

Cannick also said he spoke with Kelly several minutes prior and that "he's confident in the way the evidence came out." 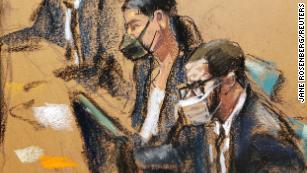 The seven men and five women making up the jury have sat through 23 days of trial, which began on August 18 and included 50 witnesses overall. They began deliberating on Friday afternoon.

In closing arguments, Assistant US Attorney Elizabeth Geddes told jurors that Kelly was the head of an enterprise that promoted his music and his brand, but also served to recruit people for Kelly to "target, groom and exploit girls, boys and women."

Kelly has been on trial in New York for one count of racketeering, with 14 underlying acts that included sexual exploitation of a child, kidnapping, bribery, and sex trafficking charges. He is also charged with eight additional counts of violations of the Mann Act, a sex trafficking law.

In defense closing arguments, Cannick said the government misled jurors and allowed witnesses to lie, saying many of the witnesses accusing Kelly of sexual and physical abuse were in consensual relationships with the singer, and are now testifying against him to cash in on his fame.

Prosecutors outlined their case, witness testimony and evidence over the course of more than six hours during their closing arguments.

"It is now time for the defendant, Robert Kelly, to pay for his crimes. Convict him," Geddes said.

The case comes 13 years after Kelly, whose full name is Robert Sylvester Kelly, was acquitted of child pornography charges at an Illinois state trial.

Kelly still has legal battles after this trial. In the Northern District of Illinois, he faces more federal charges, including child pornography and obstruction charges. He also faces criminal charges in Minnesota, for two counts of engaging in prostitution with a minor, and Illinois state charges for aggravated criminal sexual abuse.

He has pleaded not guilty to all charges and denies any wrongdoing.

The 13-count indictment released in July 2019 in the Northern District of Illinois accused Kelly of videotaping himself having sex with at least four girls younger than 18 beginning in 1998. A few years later, after Kelly learned that some of those videos were missing from his "collection," he and others began paying "hundreds of thousands of dollars" to several people to recover them, the indictment says.

Also in 2019, a grand jury in Cook County, Illinois, indicted Kelly on 10 counts of aggravated criminal sexual abuse involving four alleged victims, three of whom were listed as younger than 17.

In August 2019, the Hennepin County Attorney's Office in Minnesota announced Kelly was charged with two counts of prostitution with a person under 18. According to the criminal complaint, a woman said the incident happened in 2001 when she was 17.