Josh Allen Joined the NFL's Elite. Next Up? Staying There.

ORCHARD PARK, N.Y. — Josh Allen recorded the greatest season by a quarterback in Buffalo Bills history. He powered the team to its first A.F.C. championship game in nearly three decades, and after losing to Kansas City, he left Arrowhead Stadium that January night knowing the Bills would be back.

Allen allowed himself a few weeks to decompress from the longest, best and most disappointing year of his young career, and when he was done, a week or two into February, he visited a sock company. There, on the basketball court at Stance headquarters in Southern California, Allen set about refining what his personal quarterback coach, Jordan Palmer, characterized as a “very, very specific” mechanical inefficiency.

Allen, 25, loves nerding out on his mechanics, or, really, anything that he thinks can accelerate his development. Of all the traits that enticed the Bills to trade up to draft him out of the University of Wyoming in 2018, beyond physical gifts and a capacity for distilling reams of information into essential shards, paramount was how Allen married a desire to improve with an aptitude for doing so.

He spent his childhood on a ranch in California’s flat and fertile Central Valley, and as with the crops his family raises, he didn’t need to see immediate returns. If he worked hard, and with purpose, he knew the results would come.

“Some guys have those incredible years, and then that’s who they are,” one such guy, the Hall of Fame quarterback Kurt Warner — who won the league’s Most Valuable Player Award in his first season as a starter — said in a telephone interview. Now an analyst for NFL Network, Warner added: “And other guys just do it that once, and they never quite capture it again. I hope this is who Josh is the rest of his career, but I did not see this coming. I did not know he was capable of it.”

Allen’s incredible year — 4,544 passing yards, 46 total touchdowns, second place in the M.V.P. balloting — thrust him into the N.F.L.’s upper echelon. It also, in August, enriched him with a six-year contract extension that tethers him to Buffalo through 2028, an investment in his future with implicit expectations.

Allen built himself into a top quarterback for a team constructed to contend for the Super Bowl title that his distinguished forebears of the 1990s could not win. Two games into this season, the central question for the Bills (1-1) is no longer whether they can make the playoffs, but whether they can remain among the N.F.L.’s elite. The answer depends on Allen. 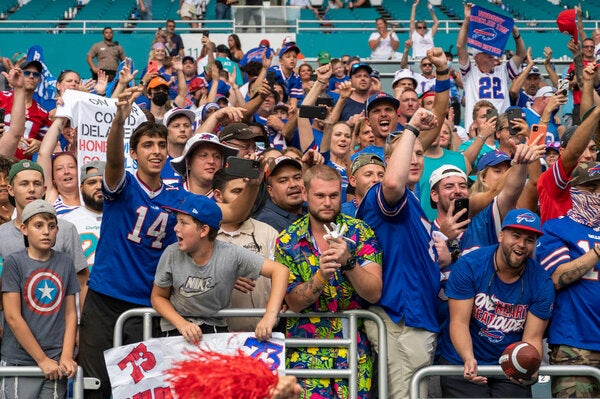 Buffalo fans traveled to Miami to see Allen and the Bills thrash the Dolphins, 35-0, in Week 2. Credit... Doug Murray/Associated Press

“I think there’s two kinds of players in this league: guys that get figured out and guys that figure it out,” Allen said in an interview after a recent practice. “And I was always going to be the guy who figured it out.”

Allen’s evolution to this lofty moment toppled a principle of football doctrine: that quarterbacks can’t enhance their accuracy. After selecting Allen in 2018, Bills General Manager Brandon Beane was told that he had just taken a tight end. He knew otherwise.

At his job interview the year before, after Buffalo’s 16th consecutive season without making the playoffs, Beane noted that the New England Patriots dynasty had been sustained in part by their three fellow A.F.C. East teams, which regularly changed coaches and front offices.

Unseating the Patriots, he said, demanded time and patience, and as he scouted quarterback prospects before the draft he resolved to invest both in Allen.

On the farmstead where Allen grew up in Firebaugh, Calif., a small community about 40 miles northwest of Fresno, his family has long nurtured cantaloupe, cotton and wheat — and, more recently, pistachios. Much like Allen himself, their trees need years of cultivation before producing a yield. Allen’s progression from imprecise college quarterback to N.F.L. star took an honest assessment of the transformation he required.

“When you lie to yourself, the only person you hurt is yourself,” Allen said. “Being completely honest and understanding that there’s things I need to work on, I’m not afraid to reach out and ask somebody for help.”

Sign up for the Sports Newsletter   Get our most ambitious projects, stories and analysis delivered to your inbox every week.

Rarely does a quarterback improve by vast margins, as Allen did, in his third season.

The best predictor of a third-year eruption, according to a May 2020 study by Pro Football Focus, is a proclivity for completing passes. At Wyoming, Allen had connected on a meager 56.2 percentage of his throws, and in his first two seasons in Buffalo, he rated last in the league.

To better evaluate Allen, Beane needed to protect him, so in 2019 he signed offensive linemen Mitch Morse and Jon Feliciano in free agency. He bolstered the receiving corps, too, adding Cole Beasley in 2019 and, in a trade with Minnesota in 2020, Stefon Diggs, who led the N.F.L. last season in yards and receptions.

“We just feel like, as he’s learned to not try and do too much, if I give him weapons, he won’t feel like he’s got to try and put the team on his back,” Beane said of Allen. “He’ll let these guys make plays.” 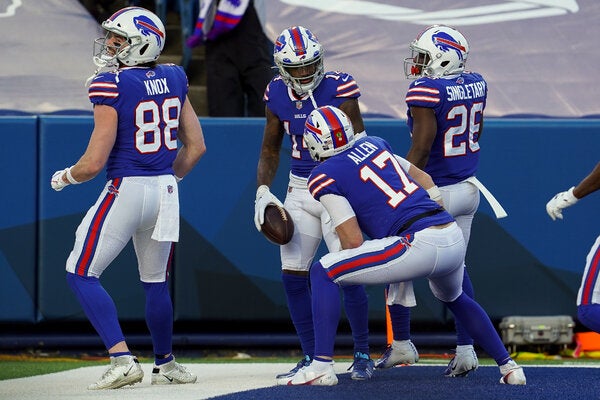 Allen could do that because he had reworked his delivery, with the guidance of Palmer and Bills coaches, concentrating each off-season on a single objective: widening his stance, for example, or commanding his off-speed passes. Concentrating on the fundamental components of his motion enabled him to throw more accurately, to any spot on the field, than he ever had. So did offensive coordinator Brian Daboll’s preference for calling pass plays on first down, when opposing personnel generally must guard against the run.

Never before, according to the Elias Sports Bureau, had any quarterback across a three-season span raised his completion rate as much as Allen did: His jump to 69.2 percent from 52.8 exceeded the previous biggest increase — Jim Zorn’s 15 percentage points with the Seattle Seahawks from 1977 to ’79.

After that overhaul, the 38-24 loss to the Chiefs in the A.F.C. championship game demonstrated the Bills’ proximity to being the best team in the league. Over the off-season, they added Emmanuel Sanders, long coveted by Beane, and re-signed two starting offensive linemen. Allen, for his part, recognized that he was no longer in reconstruction mode. His challenge now is to refine what he has done and to nudge the Bills a little deeper this season.

Allen, though, is not a nudger. Among the traits that distinguish great quarterbacks from the merely good is situational awareness, and Palmer has discussed with him at length the importance of controlling emotions at climactic junctures, of making prudent choices when the impulse to go all YOLO tugs hard. And after “making the most consecutive good decisions I’ve ever made” last season, Allen said, it’s imperative that he doesn’t get bored with what he called “the easy stuff” — throwing two- or three-yard passes, or flinging the ball out of bounds instead of forcing a bad throw.

For the last year and a half, Allen has also worked with a biomechanics expert, Chris Hess, who at various stages of the off-season has gauged Allen’s functional movement and, using 3-D motion capture analysis, digitally mapped his throwing motion. At first, Hess didn’t think Allen was engaged. For every assessment Hess relayed, Allen offered a monosyllabic response. Two weeks later, Hess re-evaluated him, and he was stunned to discover that Allen had retained everything.

“I wasn’t moving fast enough for him,” Hess said. “He processes so quick, but he can filter it, too, and be like, ‘That’s important to me.’”

Allen wanted to address what his left foot did when he hitched, or bounced forward in the pocket at the end of his drop back, on certain routes — overs from the left and digs from the right. The flaw inhibited his ability to maintain control through the release of the ball. Before he could try new footwork on the field, he needed to retrain his patterns, and the smooth surface of the court at Stance helped Allen do so without sliding. 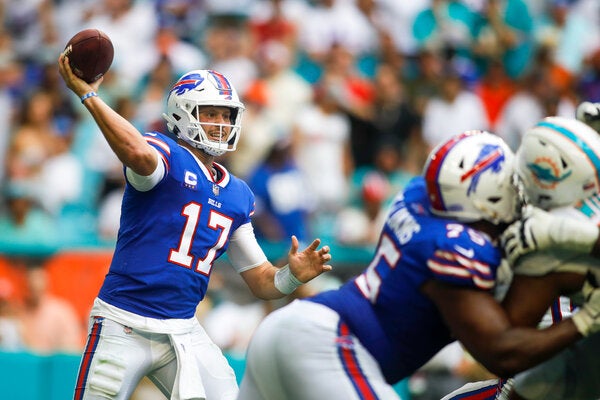 “Whether I’m throwing 30 times a game or three times a game, if I throw three times, I better have made three right decisions on where the ball should be,” Allen said. Credit... Sam Navarro/USA Today Sports, via Reuters

In Hess’s experience, quarterbacks typically don’t improve their mechanical efficiency during the season, either because they revert to old motor patterns or they compensate for various ailments that arise. But Allen did in 2020, helping him start from a more advanced place this off-season, when he focused on building lower-body strength and mobility.

In a boardroom in New Jersey this month, Hess cued up on a smart television side-by-side images of Allen from the past two Julys, and the difference was stark: Allen became balanced, stable, no longer listing forward as he threw.

Standing in a tunnel beneath Highmark Stadium just before the season began, Allen mentioned how attuned he felt — to expectations, his body, his responsibilities.

“It’s not about me,” Allen said. “Whether I’m throwing 30 times a game or three times a game, if I throw three times, I better have made three right decisions on where the ball should be.”

Allen, though, hasn’t made entirely right decisions so far. After losing to Pittsburgh in Week 1, he suggested he was struggling with his footwork, and despite rebounding to thrash Miami in Week 2, Allen still committed what Pro Football Focus calls turnover-worthy plays — involving poor ball security or passes that have a strong chance of being intercepted — on a career-high 10.8 percent of his snaps.

Every snap he takes still seems to generate a greater range of outcomes than a Choose Your Own Adventure novel, and maybe that will never completely change. But week after week, the best quarterbacks are not those who dominate the highlights. They’re the ones who think fast, make smart throws and don’t commit turnovers. Allen can do that — has done that — and if he can do it consistently, then the longest, best, most gratifying season in Bills history might lie just ahead.