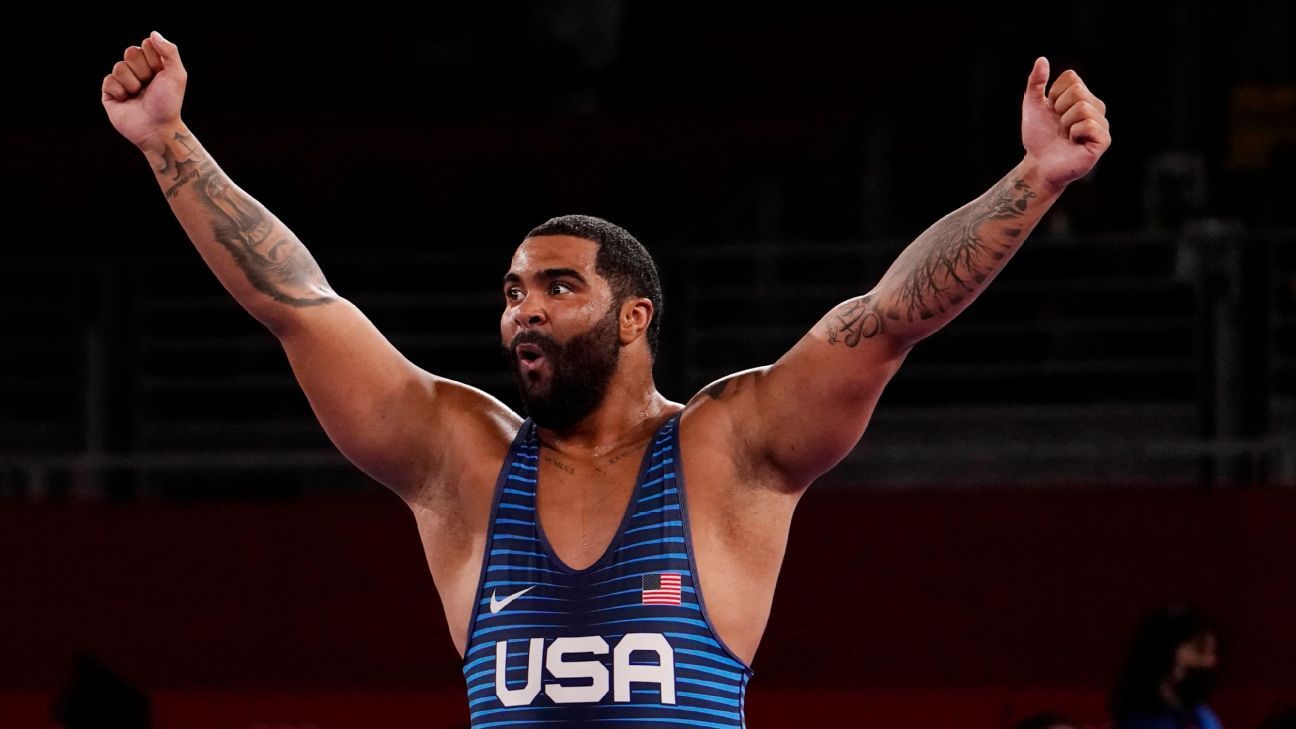 How many 275-pound men do you know who can do a backflip?

While you're ruminating on that seemingly trivial question, let's take this thought exercise a step further: How many 275-pound men do you know who can do a backflip, capture the attention of Triple H and Ric Flair with their athletic prowess, win an Olympic gold medal and sign a multiyear deal with WWE before graduating from college?

I reckon not many aside from Gable Steveson come to mind.

That's because the tantalizing heavyweight freestyle wrestler is one of a kind, a bona fide original.

Childhood dream accomplished.. I have officially signed with the @WWE!!! Thank you for the opportunity!! LETS WORK 💪🏽

"When and if I can win, put on a good show for America, that flip is coming," Steveson teased to NBC Chicago of his signature post-victory backflip ahead of his awe-inducing run at the Tokyo Olympics in August.

In due time, the ultimate showman made good on his promise.

There's a fine line between confidence and hubris, and Steveson walks it masterfully. The 21-year-old's keen sense of self and his belief in his otherworldly abilities is what enabled him to cruise through the first three matches of his Olympic debut without giving up a point.

It's a feat that's particularly impressive when you consider one of his opponents was Taha Akgul of Turkey, the defending Olympic champion. Steveson -- The University of Minnesota Gophers' heavyweight, reigning NCAA Division I National Champion and winner of the Dan Hodge Trophy -- made light work of Aiaal Lazarev of Kyrgyzstan in his opening match, taking only 2 minutes, 2 seconds to win 10-0. He followed that up with an 8-0 drubbing of Akgul before winning his semifinal match against Lkhagvagerel Munkhtur of Mongolia 5-0 to advance to the men's freestyle 125kg wrestling final.

"He's the best heavyweight wrestler to probably ever step foot (on the mat),'' Steveson said of Akgul after their quarterfinal showdown last month. "But his time is up. I came here for business. I came here to win. ... Ain't nothing going to be given to me. I've got to go get it.''

And that's exactly what he did in an incredible comeback win over Geno Petriashvili -- the 2016 bronze-medalist and three-time world champion (2017-19) of Georgia -- in the final.

Steveson was born in 2000, and America hadn't won an Olympic gold medal in men's heavyweight in his lifetime (Bruce Baumgartner, 1992). If you know his story, it's not surprising that the Apple Valley, Minnesota, native would be the one to get it done.

That is not to say the Team USA standout's mom set this all in motion by choosing to name her son after wrestling legend Dan Gable (Steveson's middle name is Dan), who was a two-time national champion wrestler at Iowa State and an Olympic gold medalist in 1972.

Who am I kidding? That's exactly what I'm saying. The whole thing felt preordained. Maybe that's why the charismatic superstar was so fearless and brash about what he intended to do. He was born for it.

If the wrestler choosing to address himself in the third person and the above quote gave you strong Dwayne "The Rock" Johnson vibes, you're on the right track. The pinnacle of athletic achievement, winning an Olympic gold medal, was just the first item on a long list of aspirations for Gable -- a stepping stone on the way to his ultimate goal: Becoming a WWE superstar.

It's not presumptive to say the wrestler's plan to use the accomplishment to springboard his WWE career was a resounding success. On Thursday, Steveson signed a NIL deal with WWE that will allow him to attend the University of Minnesota for his senior year and defend the Division I national championship at heavyweight. WWE will also set up a remote training facility for Steveson near campus where he'll learn the finer points of in-ring work with WWE coaches.

While only time will tell if he will eventually be afforded opportunities like The Rock or Steveson's mentor, fellow Minnesota great and WWE champion, Brock Lesnar, his ascension to superstardom feels about as certain as a post-victory backflip.

"When you're a kid, you don't really know how to make it to the WWE, but when I got to the University of Minnesota, I learned how Brock went about things and how to make connections," Gable told Gopher Sports.

"My relationship with Brock has been awesome. It's outstanding that a guy like that has noticed me and has gone out of his way to be there for me and guide me in the right direction."

It was never a matter of if Steveson would go down the professional wrestling route, but when. Which is the same energy I'm bringing to the question of whether we will ever get to see him face off with Lesnar.

Steveson has already made a ton of noise in the professional wrestling space without ever stepping in the ring. From appearing in the crowd at NXT TakeOvers and WrestleMania to waving at Vince McMahon on Twitter (and eventually meeting up with him at SummerSlam 2021 after his Olympic victory), Gable kept his name top of mind among the WWE brass and stars alike.

The Man I Wanted To See.. @WWE pic.twitter.com/Klc4nsE9i0

Then there was the famed picture of the Team USA standout with Roman Reigns and his manager Paul Heyman.

"The picture of me, Paul (Heyman), and Roman Reigns is gonna go down as maybe one of the best wrestling photos in history," Steveson said. "Just because the path that I'm taking with it and the path that Roman Reigns has set in stone being a champion, that'll probably never be defeated again. The path that Paul Heyman has done for wrestling. He's probably the greatest spokesperson. (He's going to the) Hall of Fame."

Steveson's expectations for his future are larger-than-life, but why shouldn't they be? Thus far he has been a walking, back-flipping testimonial for the benefits of doing it big.