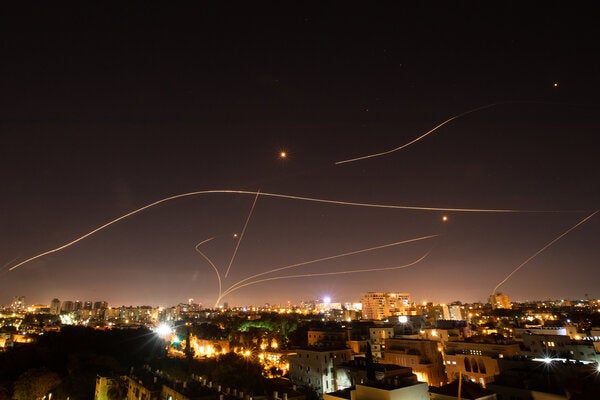 Israel’s Iron Dome defense system intercepted more than 90 percent of the rockets launched by Hamas in May. Credit... Corinna Kern for The New York Times

WASHINGTON — The House on Thursday overwhelmingly approved $1 billion in new funding for Israel’s Iron Dome missile defense system, after a debate that exposed bitter divisions among Democrats over United States policy toward one of its closest allies.

The vote was 420 to 9 to help Israel replace missile interceptors used during heavy fighting in May amid a devastating rocket and missile war with the Palestinians, reflecting the widespread bipartisan support in Congress for Jerusalem that has persisted for decades.

But it came only after a group of progressive Democrats who have accused Israel of human rights abuses against Palestinians revolted, effectively threatening to shut down the government rather than support the money. Democratic leaders were forced to strip it out of legislation to keep the government funded past a Sept. 30 deadline, which passed the House on Tuesday, and approve the Iron Dome money separately.

The liberals’ maneuver roiled centrist and Jewish lawmakers, who said they were appalled and astonished by their colleagues’ refusal to fund a defensive system to protect Israeli civilians.

“Whatever your views on the Israeli-Palestinian conflict, using a system that just saved hundreds, if not thousands, of lives as a political chit is problematic,” said Representative Elissa Slotkin, Democrat of Michigan.

The back and forth was the latest flare-up in a long-simmering feud between the energized progressive wing of the party, which has demanded an end to conditions-free aid to Israel, and other Democrats who maintain strong backing for Israel’s right to defend itself. The internal tensions come as a growing number of Democrats in Washington, prodded by the party’s left flank, say they are no longer willing to give the country a pass for its treatment of the Palestinians.

“We must stop enabling Israel’s human rights abuses and apartheid government,” Representative Rashida Tlaib, Democrat of Michigan, said on Wednesday night, announcing that she would vote against the bill.

Representative Ilhan Omar, Democrat of Minnesota, on Thursday argued that the United States should no longer continue to provide Israel with funding “without addressing the underlying issue of the occupation.”

“This is not about one country,” Ms. Omar said. “If human rights are truly to guide our foreign policy, we need to act like it everywhere. Otherwise our words ring hollow.”

The episode underlined just how tenuous Democrats’ razor-thin majority in the House is — and how any disunity can threaten party leaders’ ability to cobble together the bare minimum votes needed to pass any bill.

Sign Up for On Politics   A guide to the political news cycle, cutting through the spin and delivering clarity from the chaos. 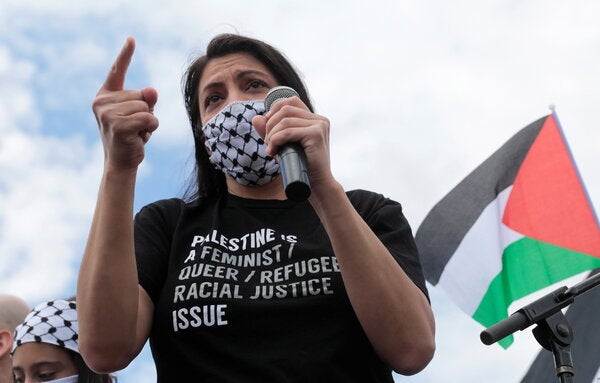 Representative Rashida Tlaib said she would vote no to the Iron Dome funding because of Israel’s treatment of the Palestinians. Credit... Rebecca Cook/Reuters

On Thursday, their comments sparked a furious backlash from some of their colleagues, who argued that the legislation was limited to supporting an entirely defensive system. They noted that during the peak of fighting in May, the Iron Dome intercepted more than 90 percent of the flurry of Hamas-launched rockets that would otherwise have landed in civilian-populated areas.

In an angry speech on the House floor, Representative Ted Deutch, Democrat of Florida, said he would not allow “one of my colleagues to stand on the floor of the House of Representatives and label the Jewish democratic state of Israel an apartheid state.”

“To falsely characterize the state of Israel is consistent with those who advocate for the dismantling of the one Jewish state in the world,” he said. “When there is no place on the map for one Jewish state, that’s antisemitism, and I reject that.”

Determined to show that the party would stand by one of the nation’s closest allies, Representative Steny Hoyer of Maryland, the No. 2 Democrat, who had lobbied for the aid, downplayed the drama in a phone call to Yair Lapid, Israel’s minister of foreign affairs, calling it a “technical delay” and reiterating his “commitment to ensuring Israel receives this needed aid.”

“After years in which the previous government neglected Congress and the Democratic Party and caused considerable damage to Israel-U.S. relations, we are today rebuilding a relationship of trust with the Congress,” Mr. Lapid wrote on Twitter, confirming the call.

Other party stalwarts, including Speaker Nancy Pelosi of California and Representative Rosa DeLauro of Connecticut, the chairwoman of the Appropriations Committee, rose on Thursday in support of the legislation, arguing that passing the additional funding was crucial to protecting Israeli civilians and noting that it was an extension of a 2016 deal struck by former President Barack Obama.

But eyeing an opportunity to peel away Jewish voters from the Democratic Party, House Republicans cast the altercation as a transgression against Israel. They said progressives’ refusal to allow the funding to pass as part of the broader government spending bill was a missed opportunity to support Israel, even though Republicans opposed the spending bill en masse.

“By blocking funding to resupply the Iron Dome, Democrats made the choice to abandon an opportunity to stand with Israel and its citizens,” Representative Steve Scalise of Louisiana, the No. 2 Republican, said.